Top-of-atmosphere (TOA) graphs of radiation flux from earth show ‘notches’ (‘ditches’?) centered at the nominal wavenumbers of long wavelength infrared (LWIR) active gas molecules, mostly CO2, which do not condense in the atmosphere. Figure 1 appears to be a typical mid-latitude TOA graph. Radiation flux intensity is plotted vs. wavenumber at any one geometric location. Wavenumber is simply the number of radiation wavelengths per centimeter. Wavenumber, cm-1 and wavelength in microns are easily converted: Divide 10,000 by either to get the other. 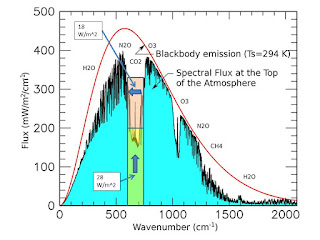 Areas on these graphs represent power which for any elapsed time is energy. If there was no CO2, the average height of the black curve between 600 and 740/cm would be approximately 330 mW/m2 which results in an area of about 46 W/m2 while the actual area remaining is only 28 W/m2. The notches represent, for any time increment, energy that is ‘missing’. The first law of thermodynamics mandates that energy cannot simply disappear so where (and when) did the energy represented by the missing 18 W/m2 go?

On average, radiation from the liquid and solid surfaces of the earth is very closely described by the Planck spectrum for a black body at 288 K (15° C, 59° F) (The colors you see are reflected sunlight). The red trace on Figure 1 shows the Planck spectrum for a black body at 294 K. Part of this radiated energy goes directly to space through an ‘atmospheric window’ in the approximate wavenumber range 770-1230 (13-8.13 microns) where no gas molecules (except O3) significantly absorb radiation. Over the rest of the total range of significant terrestrial radiation (6.5-200 microns, wavenumber 1538-50 cm-1) the radiation is absorbed by LWIR active gases (which, including water vapor, are misleadingly called greenhouse gases (ghg)).

Logic mandates that the elapsed time between when a molecule absorbs a photon and when it emits one must be more than zero or there would be no indication the photon had been absorbed. This elapsed time is called the relaxation time. Experiments [2, 3] have determined the relaxation time is longer at lower temperatures. It is about 5 microseconds for CO2 in the atmosphere where people are.

At the scale of atoms, the atmosphere can be visualized as molecules bouncing elastically (no energy loss) off each other in empty space. At sea level conditions, the time between collisions for the air molecules (molecule diameter 4E-10 m) is extremely short, less than 0.0002 microseconds [4]. Among other properties, these collisions are the basis for thermal conduction in the gas. Therefore, electromagnetic radiation (EMR) energy absorbed by ghg molecules is immediately shared with surrounding molecules both ghg and non-ghg. The sharing is thermal conduction in the gas. The process of absorbing radiation and sharing it with surrounding molecules is called thermalization.

Below the tropopause (about 8 to 12 km depending mostly on latitude) water vapor (WV) decreases from an average of about 10,000 ppmv (1%, 4% near the equator) at ground level to, because of the low temperature (about negative 50 °C), 32 ppmv at the tropopause. Radiation from WV molecules below about wavenumber 600/cm can only be absorbed by other WV molecules. This huge WV molecule population gradient means that much of the outward directed radiation from WV molecules will make it all the way to space, especially from near the tropopause. This is demonstrated by the ‘hash’ observed in this wavenumber range measured at the top-of-atmosphere as shown on Figure 1.

The redirection mechanism is radiation energy that is absorbed by CO2 below the tropopause is shared with all molecules (thermalization) and emitted to space by WV molecules.

Ghg in the warmed air can emit photons only at a limited number of wavelengths (or wavenumbers) characteristic for each molecule species. Furthermore, all theoretically possible wavenumbers are not equally likely.

Radiance calculated by MODTRAN6
MODTRAN6 [5] is a computer program developed for the Airforce Research Laboratory which (besides other things) can calculate the radiation flux at selected elevations in the atmosphere for specified constituents and conditions. It contains default values for several environments including the tropics and the 1976 Standard Atmosphere. Values for water vapor change rate and atmospheric temperature vary with altitude for different latitudes and seasonal conditions as shown in MODTRAN documentation [7].

Figures 2 and 3 are typical graphs showing how radiation flux absorbed by ghg other than WV is redirected to WV with increasing altitude. The redirection is quantified by the progressively increasing depth of the ‘notches’ at the characteristic wavenumber ranges for each ghg (except WV). Note that, at 20 km redirection from CO2 is greatest and at 50 km and higher some of the flux has returned to the CO2 molecules. Somewhere in the vicinity of 20 km some of the energy that has not yet radiated to space is redirected back to the CO2.

The ‘notches’ are evidence of energy redirection. Redirection is possible because of thermalization and reverse-thermalization in the gaseous atmosphere.

Energy absorbed by ozone begins to be significantly redirected to WV above 10 km, reaches a maximum below 50 km and stays at the maximum level above 50 km. 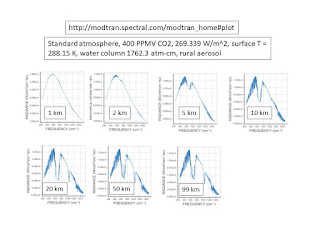 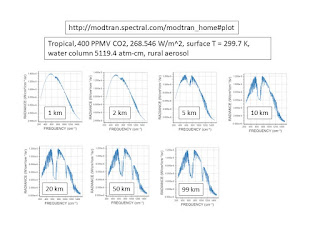 With increasing altitude, the non-radiant flux is replaced with radiant flux and the solar energy that was absorbed by the atmosphere and clouds is incorporated. Most of this takes place by about 10 km so the graphs at 20 km and higher should be reasonably valid.

Most of the photons emitted by the water vapor molecules are at wavelengths different from the comparatively narrow band that CO2 molecules can absorb. Effectively, much of the terrestrial thermal radiation energy absorbed by CO2 (and other non-condensing ghg) is thermalized, redirected to, and radiated to space from water vapor.

At very high altitudes, temperature, molecule spacing and time between collisions increases to where reverse-thermalization to CO2 (and O3) molecules becomes significant as does radiation from them to space.

Figures 2 and 3 answer the question posed above of where (and when) the energy went which is ‘missing’ at the notches in TOA graphs. In Figure 1, the 18 W/m2 ‘notch’ is permanently redirected to water vapor and radiated to space. The 28 W/m2 radiates to space from the 600-740 cm-1 wavenumber range. At low altitude the tiny amount of energy absorbed by CO2 and much greater amount absorbed by water vapor are thermalized; warming the low altitude atmosphere.

The water vapor content of the atmosphere diminishes rapidly as the temperature decreases with increasing altitude. Above the tropopause it has declined to a level where emission from water vapor ceases to dominate and emission from CO2 molecules becomes significant. The result is part of the energy which had been redirected to water vapor at low altitude is, at high altitude, redirected back to the wavenumber range 600-740 cm-1. The ’redirection’ is not geometric because all wavenumbers refer to photons at essentially the same physical location.